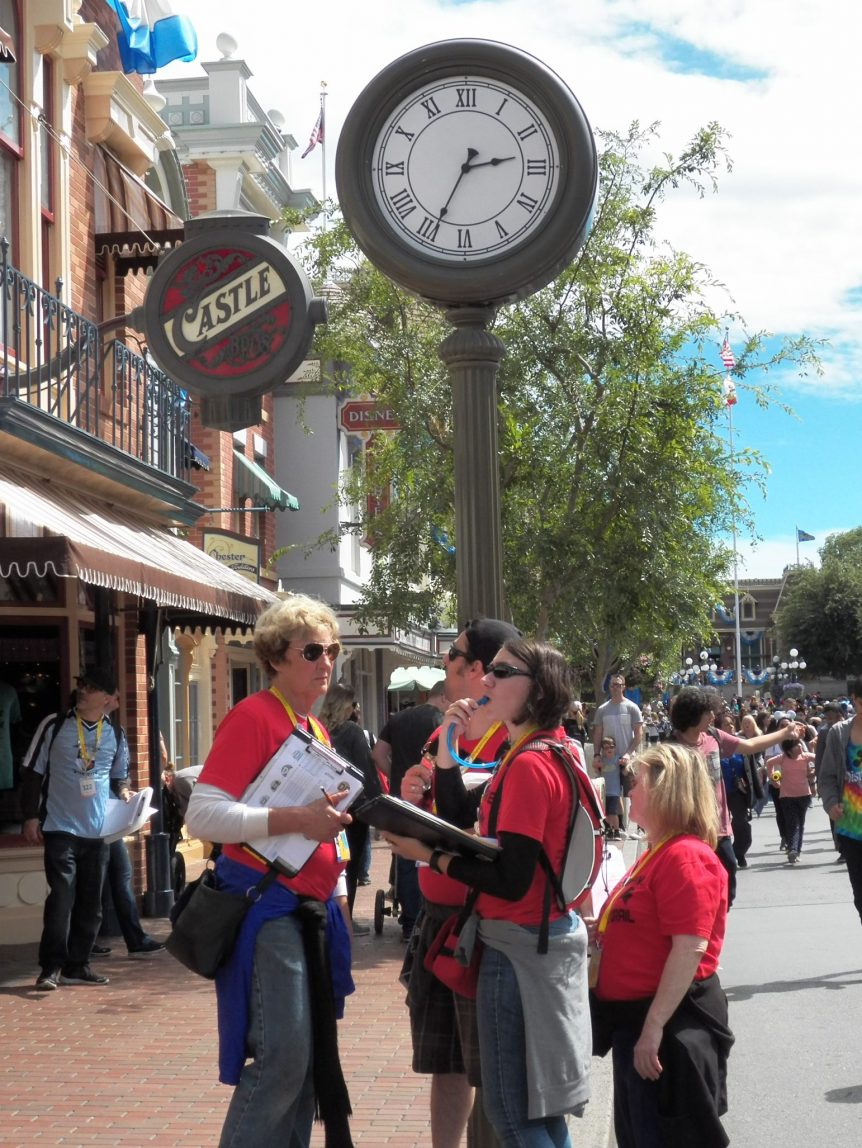 Time management is a key part of a successful MouseAdventure game day strategy. Our games are designed to challenge teams within time constraints, and many teams do not finish all the quests. Following our tips can make all the difference between a happy experience and an epic meltdown.

Scan the packet. When teams receive their game packet at the beginning of a game, there is always the urge to get into the park and start working on quests right away. Teams want to be the first to get going and think they will just figure it out as they go.  It's important that you resist the urge and take a moment to review the game materials as a team.

Take a quick glance through the materials to get an idea of where certain quests will take place. Make note of any specific time limits; late starts or endings before the final event finish time due to attraction, show or other restrictions trip up teams at every event.

Decide on a plan of attack. Mark the top of each quest with the probable location and put them in order of point value to allow your team to come up with a game plan. Do you want to start on a harder quest (which may take more time) or knock off a few simpler ones? Is there information that can be collected along the way between those simpler quests? Is there a quest that would be easier to accomplish without a parade going on? Do you need to ride an attraction for a quest, and what is the wait time?

Plan a starting location and how you will proceed through the park to avoid any unnecessary backtracking that would cost you valuable time and tire you out.

Keep an eye on the clock. With all this in mind, it's important to keep an eye on the time spent collecting data and solving quests; you may want to designate one member as the timekeeper. Some teams set reminders every 15 minutes to keep them on task. Although electronic devices are not permitted to be used during the game, a phone vibrating in your pocket is fine – just be sure you don't take it out. There are also clocks everywhere in the parks, or you can use a watch.

If you feel that you are spending too long on a quest, it may be best to move to an easier one rather than waste more time and become frustrated. You can always come back to a quest later, which can provide a fresh perspective after some time away.

Try, try again. Each team is different, and you will need to experiment on what works best for you and your team. Some teams like to dive right into the harder quests and get them out of the way, others want to get a couple of quests done to gain confidence before tackling the harder ones.

Ask for help. Always remember, you can head to MouseAdventure Central and ask questions at any time. We will always tell you if what you are asking is considered a hint (basic teams have 3 free hints that can be used). Sometimes, just the act of asking the question is enough to trigger what you need to do next.

Play at Home with MouseAdventure in a Box

MouseAdventure in a Box will bring the excitement of our in-park event to your home! Registration opens April 14.

We are all anxious to get back to in-person MouseAdventure events and the Third Gate Games team misses seeing all of our teams. As much as we would like to get back to hosting a full-fledged game at Disneyland this spring, certain factors have conspired against us. The continued scarcity of reservations makes it difficult to plan ahead. In addition, ...

It has been a very long year and a half since we last had an in-person event, and we have missed you all very much. Last year we announced that we would not have any in-park events in 2020, and for the foreseeable future, which it turns out also included 2021. Luckily, we were able to launch MouseAdventure In a ...